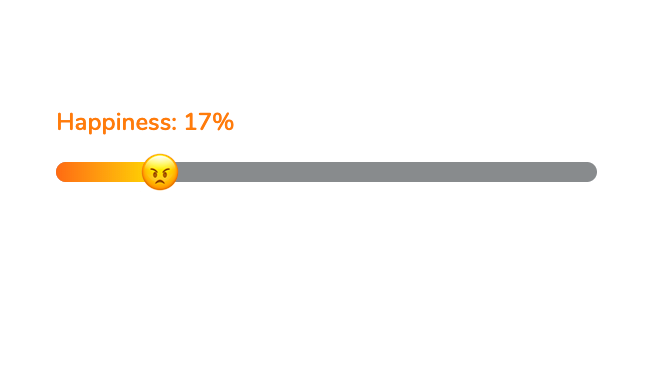 Josh Collinsworth’s Likert-based slider input styles a range of emoji in place of the usual grades. It may bring a piece of visual delight to our feedback survey forms?

A measure of satisfaction and delight?

The 12 emoji that display on the slider button range from, “swear I’m angry” (🤬) to “love it” (😍). The slider is billed to be accessible and requires testing for certainty. Displaying the “happiness” score helps.

If the emoji proves too small or needs to be placed away from beneath a cursor, then a bespoke image sprite sheet and CSS classes called by the JS would be a solution. This strategy would overcome doubts around the visual ambiguities between some of the emoji when employed as emoticons? As a concept, it looks well — and certainly an improvement on an array of checkboxes?

Emoji are emoticons. The word roots are in “emotion” and “icon” and trendy Japanese for a character. Some like to engage in definitive arguments over their differences, which in the digital space is quite nugatory. (Typed “emoticons” are often converted programmatically into “emoji”). Cydney Grannan provides an argument.

Call them what you will. They are an easily recognisable and therefore useful codifier for the emotions; of happiness, satisfaction, and delight. Or their antitheses… 🙂