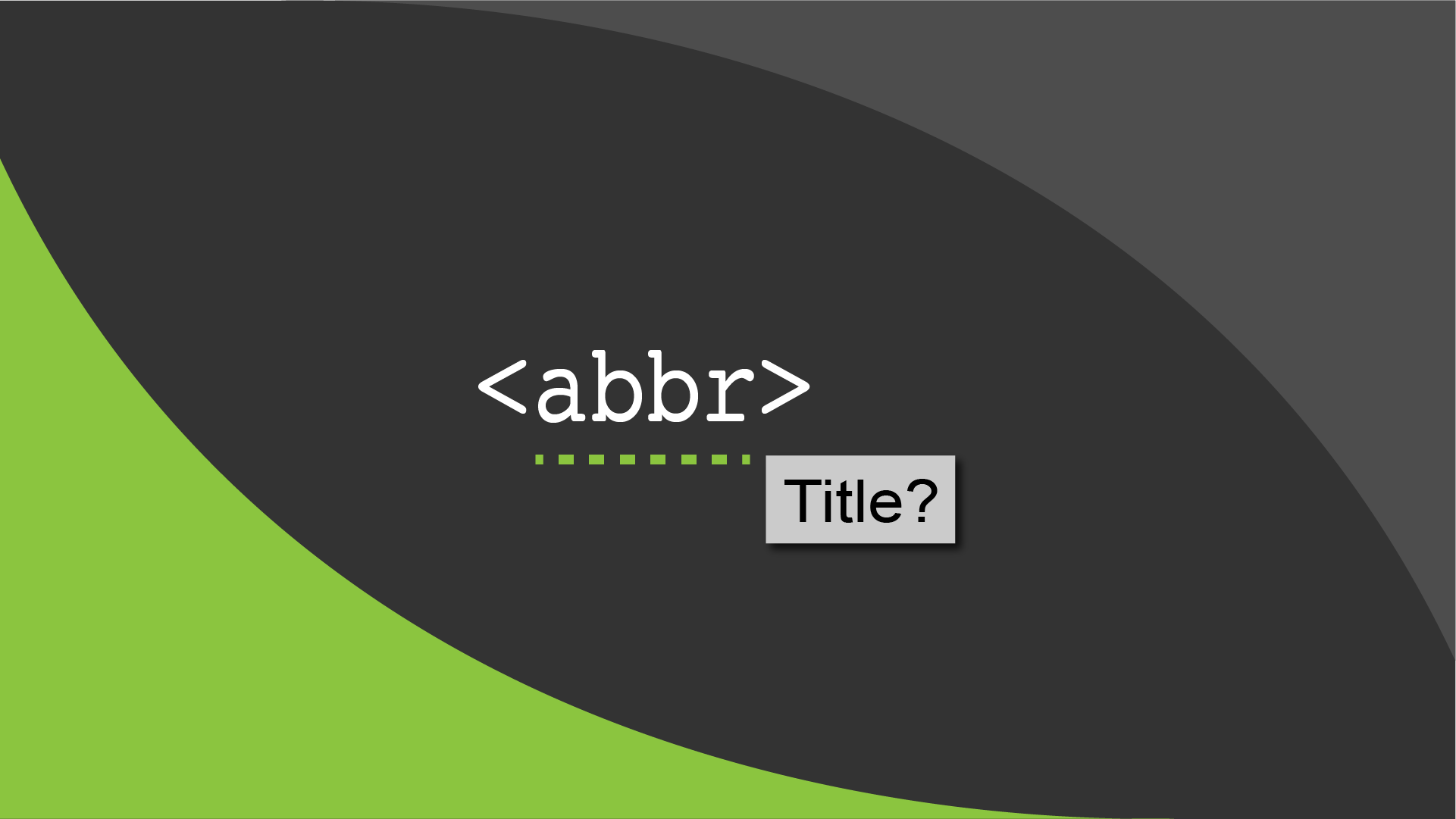 The following code snippet caught my attention when following posts by Chris Coyier and Eric Bailey diminishing objections to the abbreviation of accessibility to “a11y”.

There is no title="" attribute within the abbr element. I was groomed to always include it.

A little research including the WHATWG Living Standard (September, 2020) confirmed the snippet is correct. I learned:

“Abbreviations that are likely to be unfamiliar to the document’s readers, for which authors are encouraged to either mark up the abbreviation using an abbr element with a title attribute or include the expansion inline in the text the first time the abbreviation is used”

When I add abbreviations in the future:

I will also consider particularly screen reader users who may skip sections between headings, etc. Writing style guidelines often prescribe defining an abbreviation only on its first page instance. Skipping past the definition may leave our screen reader users stranded.

The default visual styles of the abbr tag seem to vary by browser? In Chrome, Safari, Firefox, and New Edge or other browsers I expect the copy text contained within an abbr tag to display as follows:

This is vital as:

The following test HTML code was opened in different Mac and Windows browsers:

When styling a visual difference between the abbr with and without the title attribute, we can use the following declarations:

Don’t forget to style the cursor to “help” to indicate the interactivity!

We can leap to an assumption that Safari attempts to consolidate display and touch screen experiences. Hover and title-based tooltips do not feature natively on touch devices. This may be sensible, or not?

It is a good habit to accommodate touch screen users by programmatically displaying the expected title tooltip. Correctly written, the native HTML without CSS or JavaScript will still reveal the abbr elements interaction state on a ‘desktop’ device with a dotted underscore, or not. Safari’s stance omits that use case.

To mitigate the situation as best we can, we must employ CSS and JavaScript, and warn visitors to ‘desktop’ pages and without either that they may be missing out on the intended experience. Think of the depreciated noscript tag only done properly for 2020 with JavaScript as follows:

On hovering over, clicking or tapping on the abbr, we:

Note. There is no need for ARIA-live, etc. when screen readers can announce the title natively. Ah, and Safari?

In tests with VoiceOver, how the abbr element is announced seemed to depend on how the screen reader was set up. At times it read the title seamlessly and at others only with effort. Abbr elements without a title attribute were read as standard copy text in all cases. I am likely only a biff with VoiceOver.

Some commentators profess adding the aria-label="" attribute. In testing, I found that interrupted and even repeated the VoiceOver flow and made a pig’s ear of the editorial intent. More testing is needed.

By chance during this blog’s drafting, NS posted the following to a Facebook a11y group:

I gave this some thought and removed the abbr altogether and tested placing a visually-hidden span between the State letters and in the adjacent paragraph as follows:

In Safari browser with VoiceOver, both paragraphs were read correctly, “M E”. The capitalization seems to work without additional mark-up? Yet, there must be a problem for screen-reader users and abbreviations as reported by ML in the same thread:

“Addendum: Not to say that I feel this is right. We could be doing better. When writing the code, I believe there are ways to use ARIA attributes to label the abbreviations differently, so the user doesn’t have to try to figure it out.”

As before, I found ARIA to be less than optimal.